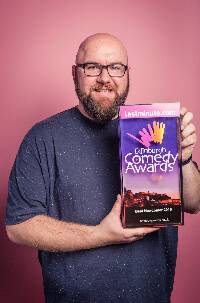 With Richard Gadd winning Best Comedy Show, Scott Gibson’s Best Newcomer triumph made it a double victory for Scotland in 2016. In his debut solo show the Glaswegian stand-up recounted the true story of experiencing a brain hemorrhage at the age of 24 and how that life-threatening event changed his outlook on life. It was a ripping yarn, expertly told and packed with jokes. It planted this 32-year-old Scot firmly on the comedy map.