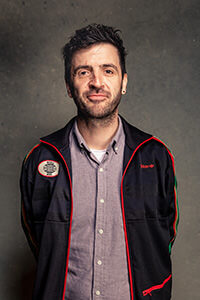 The Things We Leave Behind

The Things We Leave Behind saw Spencer Jones shelve his popular alter-ego, The Herbert, but still bang together comedy styles in a brilliantly absurd manner. Set in his own basement workshop, the show was peppered with barmy visual gags and loop pedal audio wizardry, from disquieting family caricatures to genuinely catchy dance and rap tracks, as he clambered through his useful clutter.