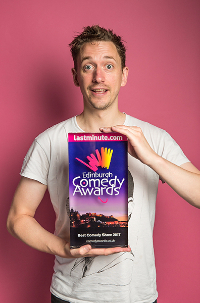 The Darkness of Robins

It took Bristol-born stand-up John Robins eight attempts to be on the list of lastminute.com Edinburgh Comedy Award nominees (he’s admitted that not being in the mix has plagued him in previous years). But with his first nomination he went straight on to win the prize. ‘The Darkness of Robins’ saw the Radio X DJ at his most candid and exposed, as he dealt with the breakdown of his relationship. But this wasn’t a bitter break-up show; this was dark, honest self-examination. It saw Robins at his most intense, creating moments of increasing tension before piercing them with killer punchlines. The Guardian's comedy critic, Brian Logan, wrote that, ‘Not only is Robins extremely forthright about his emotional wretchedness post-break up, he’s also consistently, uproariously funny.’