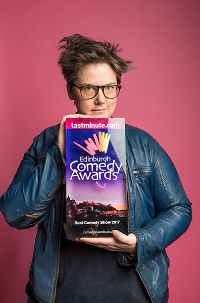 Having scooped the Barry Award at the Melbourne Comedy Festival earlier in the year, the buzz around Hannah Gadsby’s latest offering was present before the Edinburgh Fringe even began. The Australian comic had been regular at the festival for a decade, but ‘Nanette’, she promised, would be her final stand-up show – her farewell to comedy. It proved to be one of the most powerful hours of autobiographical stand-up the Fringe had seen in years, as Gadsby talked about the pain she felt growing up gay in Tasmania, and how filtering those experiences through stand-up hasn’t been easy. Her swansong received rave reviews, with The Times’s comedy critic, Dominic Maxwell, calling it ‘one of the finest hours of stand-up I’ve seen at the Edinburgh Fringe,’ in his five-star review.