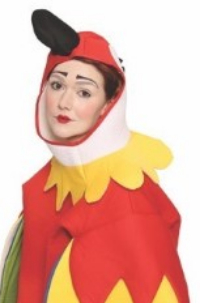 ‘Complete nonsense’ was how Elf Lyons’s hour of ballet-inspired absurdism was often described. Lyons is a graduate of the Philippe Gaulier clown school in Paris, and it’s probably not unfair to conclude that her time across the Channel inspired her to speak only in ‘Franglais’ in her nominated show. ‘Swan’ was Lyons’s reinterpretation of ‘Swan Lake’, with the comic donning a parrot costume, revealing silly props and performing plenty of ballet moves to retell the story in her own ludicrous fashion.