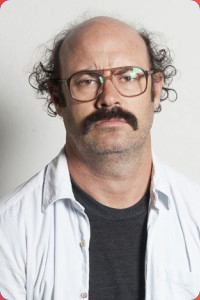 Nominated in 2011, Sam Simmons' inimitable brand of whimsy was resurgent in 2014 and gave him his second award nomination. The Australian's imagination manifested itself over a multimedia, multi-disciplined comedy landscape; a beguiling mix of poignant and pointless. Sam is currently looking forward to a Soho Theatre run and to touring later in the year.