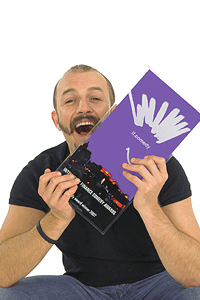 So I Suppose This is Offensive Now

A veteran of both Edinburgh and the comedy scene at large the hard-working Australian capped a string of energetic Edinburgh shows with this winning one, complete with a beguiling coup de theatre. Subsequent to winning the award Burns has toured extensively and released a number of DVDs and has a book out in August 2010.