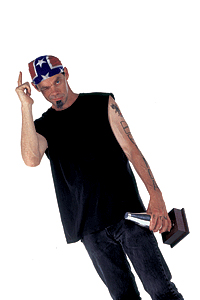 is Otis Lee Crenshaw with Damian Coldwell and Christian Reilly

Dividing his time between his native Montana and the UK Rich Hall is a massive Fringe favourite whether in his solo guise of as Southern jailbird Otis Lee Crenshaw. Crenshaw's down-to-earth wisdom and comedy songs was enough to charm the panel this year and since winning Hall has had three of his own BBC series among many other TV appearances and has written a string of books including two acclaimed short story collections.