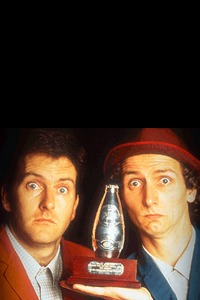 Colin Lane and Frank Woodley's mix of songs, sketches and physical comedy won the day for slapstick in this year. The duo, now working apart, were massive stars in their native Australia, relentlessly touring across the country. Post-Perrier they enjoyed their own TV show in Australia The Adventures of Lano and Woodley meanwhile their last ever show, filmed in Melbourne in 2006, was made into an award-winning DVD.