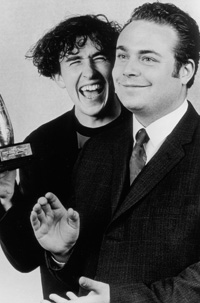 In Character With John Thomson

Coogan's contribution to the canon of character comedy classifies him as one of the greats. Alan Partridge was just one, but the most notable, example of an enduring icon of comedy lasting from The Day Today through two celebrated TV series to his last live tour only a few years ago. Hollywood has beckoned for Coogan, meanwhile his production company has been involved with many successful comedies including The Mighty Boosh, Nighty Night and Marion and Geoff.