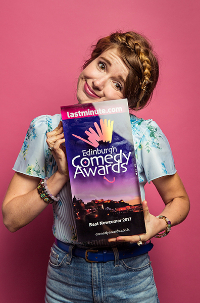 Has there been a messier Best Newcomer winning show than Natalie Palamides’s ‘LAID’? The American comic’s solo debut – directed by 2012 Best Comedy Show winner Dr Brown – was a yolky treat, as Palamides began by hatching from a giant egg before giving birth to her own, and then posing the question: ‘Do I raise my egg or eat it?’ The recurring dilemma saw the Pennsylvania-born clown mourning over hastily cooked omelettes and smashed shells as she explored motherhood, femininity and, well, cooking. No wonder the floor was covered in tarpaulin.