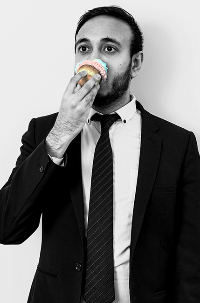 After winning the Hackney Empire New Comedian competition earlier in the year, Bilal Zafar also impressed the Edinburgh Comedy Award judges with his debut solo show. In ‘Cakes’, the Wanstead-born comic recounted an epic, twisting tale about how a Twitter joke went too far. He detailed baiting online bigots about his made-up Muslim-only cake shop and hit back at Islamophobic trolls with pure silliness.