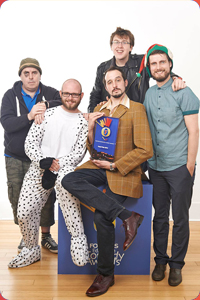 Funz and Gamez was the surprise hit of the Fringe in 2014.

Phil Ellis, Mick Ferry, Will Duggan and James Meehan (from Gein's Family Giftshop) put an adult twist on children's entertainment and made their subversive show accessible to all ages.

Playing a collection of down-on-their-luck characters, the troupe arm-wrestled and bribed (with sweets) their audience into submission among many other wheezes.

Soon after the Fringe, Funz and Gamez were featured on BBC Radio 4's Fresh from the Fringe. They are currently looking forward to an 18-show residency at London’s Soho Theatre in December (2014) and appearances at Sheffield Comedy Festival (October 2014) and Leicester Comedy Festival (February 2015) are scheduled. Meanwhile, more radio opportunities beckon and are among other possible format developments for the show.