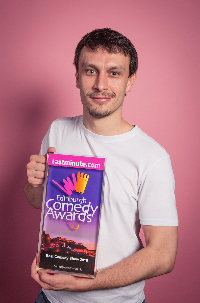 After three dark, unhinged shows full of sex and violence - including 2015’s innovative stunt comedy show ‘Waiting for Gaddot’ – Richard Gadd went down a personal route in 2016 and not only bagged his first nomination but the award itself. In the extraordinary ‘Monkey See Monkey Do’ the Fife-born comic dealt with the difficulties of overcoming a sexual assault four years previously, while simultaneously exploring masculinity and anxiety. Gadd became only the second Scottish comic to win the award – after Arnold Brown in 1987 (well, and Phil Nichol in 2006, who was born in Scotland but raised in Canada) – and spent most of the show running on a treadmill, clocking up around six miles each show. Panel chair Alice Jones, Arts Editor of the i, called it ‘candid, brutal and tender’ and said the show marked Gadd out as ‘a mercurial talent to watch.’