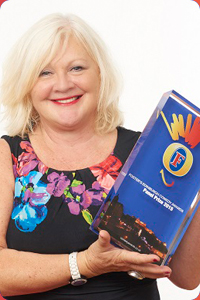 The Gilded Balloon celebrated its 30th anniversary in 2015 and so there was perhaps no more fitting a time to celebrate its founder and director, Karen Koren. Over the years The Gilded Balloon has played host to the great and the good of British Comedy, including the winners of the prestigious So You Think You're Funny competition hosted there - they include Lee Mack, Peter Kay, Johnny Vegas, Dylan Moran, Tommy Tiernan, Sarah Millican and Jack Whitehall.