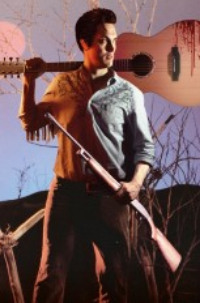 ‘The Elvis Dead’ was the late-night cult hit of the Fringe, with punters queuing round the block to nab a seat at the midnight show. The idea was simple: it was a mash-up of ‘The Evil Dead 2’ and Elvis Presley, with Kemp taking on Bruce Campbell’s iconic role while singing Elvis songs. By the end of the hour, Kemp had chopped off his own arm, was covered in blood, but still donned that famous Presley lip curl.